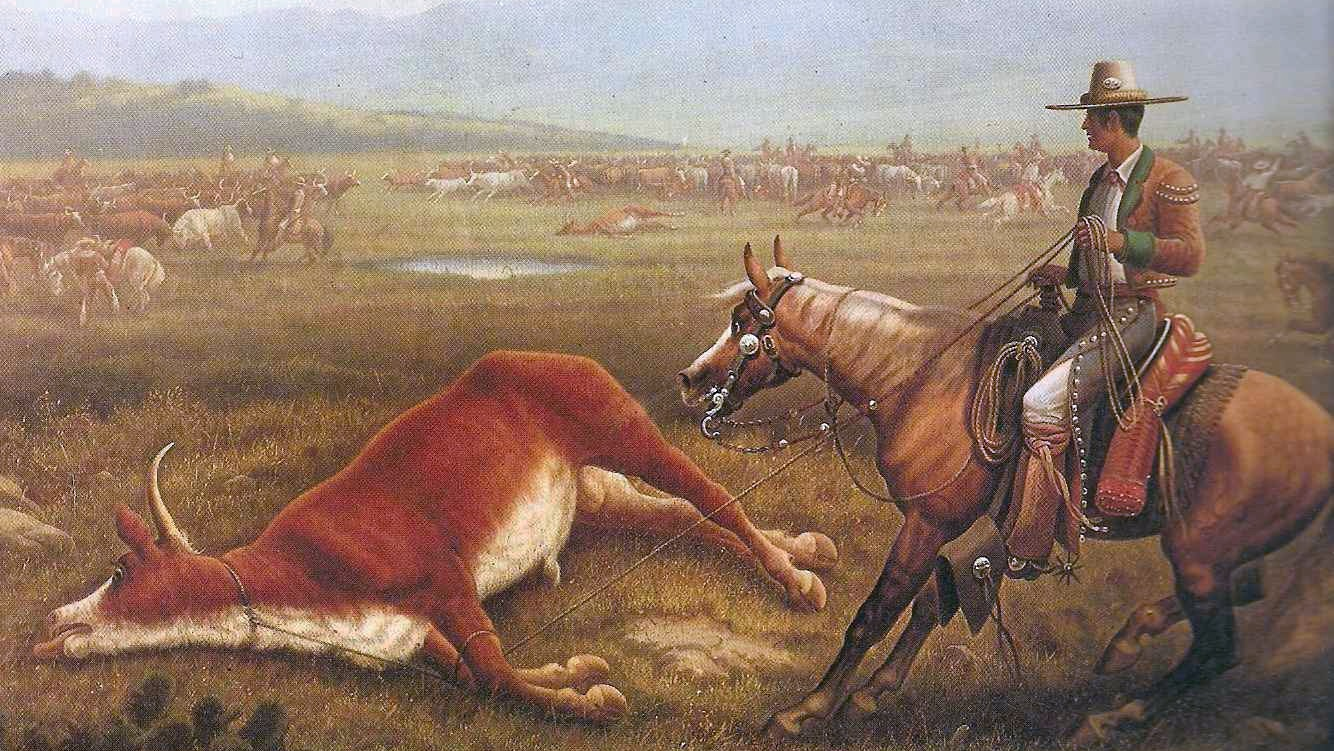 In this country there is no better place to find the preservation of the old Spanish ways than New Mexico, as this state is well known for having been isolated hundreds of years by vast rugged distances and warring Indians.

So well preserved are the origins of the American West that even the 15th century “foundation” livestock scarcely available in other parts of the world thrive in New Mexico. You can still find descendants of the rugged, enduring, power house-in-a-small-package Spanish Barb horses, Churra sheep, and Corriente cattle. You can hear cowboy history in the old, spoken Spanish. Although these old vaqueros are increasingly hard to find, there remain a few smaller than average, more rugged than average Onate colony decendents who will speak to you in the 15th century Spanish of the conquistadores preserved through fifteen generations of oral tradition.

Happily, to this day, the romance of wide open western spaces lives on in New Mexico. The Spanish caballero, already sporting a legacy of proud horsemanship even before Columbus’ arrival in North America, saw the first rodeos whenever young vaqueros had some free time, an opportunity to turn work into play, and to show off their skills.

The first American Rodeos which took place in the early 1600’s were conducted by the first American cowboys, the Spanish vaqueros. Two hundred twenty three years before the first easterners arrived in Texas to learn the art of cowboying the vaquero was already a folk hero in New Mexico. He had come to be known as a horseman of great skill and bravery. He was a solid comrade with his fellow vaqueros and a die-hard loyalist to his ranch and it’s brand. He was looked up to by wranglers as a man who could rope anything that moved and ride anything that bucked. He could successfully do just about anything from a saddle. During the time of these first rodeos standardized rules and point systems were developed to determine who would win the vaquero competitions. “Jueces de campo,” or rodeo judges presided over the rodeos to settle ownership disputes and assure that stock were branded correctly. Generally the vaqueros tended the stock on the open range until it was time to sell, brand, or butcher the animals. Anyone of these events required a rounding up of the animals – “al rodear.” This was called a rodeo.

The killing (butchering) of an animal which frequently accompanied a rodeo was called a “matanza.” The first recorded references to a Rodeo in the official republic of the United States are made in old New Mexico family journals.

As matanza researcher Cynthia Martin explains “A traditional Matanza is a family and community-gathering event, with friends and neighbors helping in the labor-intensive job of processing a large pig, goat or sheep”.

“Taking at least an entire day, the process goes from the slaughtering the animal and butchering the meat to cooking the various meat products and preparing what is left for distribution and storage. Of course all those helpers also need to be fed, so the women in the family plan and prepare large amounts of food for the event.”

Today some Matanza celebrations are coming back. They are more in the tradition of Home cooking, Family and friends in the 21st century.

The Hispano Chamber of Commerce in Valencia County New Mexico have begun the tradition again and made it into a fund raising event. Teams compete each year for prizes in the butchering slaughtering and preparation of traditional matanza foods.